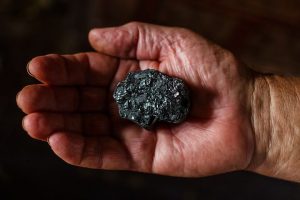 Coal is a sedimentary rock made predominantly of carbon that can be burned for fuel and is the largest domestically produced source of energy in America. With that being said, it is important to understand what exactly coal is since it is used to generate a significant measure of our nation’s electricity.

Coal is readily combustible, black or brownish-black, and has a composition that, including inherent moisture, consists of more than 50 percent by weight and more than 70 percent by volume of carbonaceous material. It is formed from plant remains that have been compacted, hardened, chemically altered, and metamorphosed by heat and pressure over geologic time. In a nutshell, all living plants store solar energy through a process known as photosynthesis. When plants die, this energy is usually released as the plants decay. Under conditions favorable to coal formation, the decaying process is interrupted, preventing the release of the stored solar energy. The energy is then locked into the coal making it a nonrenewable energy source.

Coal is found all over the world including our country, predominantly in places where forests and marshes existed prehistorically, before being buried and compressed over thousands of years. Some of the largest deposits are located in areas of the Appalachian basin in the eastern U.S., the Illinois basin in the mid-continent region, and throughout the Rocky Mountain basins in the western U.S. according to The United States Energy Administration. Since our country accounts for 13% of the world’s coal production, a valuable resource to learn more about the top coal-producing regions in the United states is NS Energy. https://www.nsenergybusiness.com/features/top-five-coal-producing-states-us/

Understanding where the bulk of our nations coal resources are located is important, but understanding the quality of the coal that is being mined is equally so. The type of vegetation the coal originated from, the coal’s depth of burial, the temperatures and pressures at that depth and how long it took the coal to form all play a major role in the type and quality of this natural resource. How long the original plant material took to transform into carbon plays a large part in the coals “rank”. Essentially, higher carbon content is associated with coal that has spent a longer time forming, while lower content is a characteristic of “younger” coal.

There are four major types (or “ranks”) of coal. Rank refers to steps in a slow, natural process called “coalification,” during which buried plant matter changes into an ever denser, drier, more carbon rich, and harder material. The four ranks are:

Also, there is peat. Peat is not actually coal, but rather the precursor to coal. Peat is a soft organic material consisting of partly decayed plant and, in some cases, deposited mineral matter. When peat is placed under high pressure and heat, it becomes coal.

According to an article published by American Geosciences, Anthracite, or “hard coal,” contains the highest amount of carbon out of all coal ranks (86%-97%) and makes up only 0.2% of coal production in the United States and is located in Northeastern Pennsylvania. Conversely, Bituminous coal, often called “soft coal,” has slightly lower carbon content than anthracite (45%-86%) and makes up 46% of all US coal production. The largest bituminous coal producers in the US are West Virginia, Illinois, Pennsylvania, and Kentucky. https://www.americangeosciences.org/critical-issues/faq/what-are-the-different-types-of-coal

Thermal Coal sometimes is called “steaming” coal and is is used to power plants that produce steam for electricity and industrial uses. For example, trains that run on steam sometimes are fueled with “bit coal,” a nickname for bituminous coal.

Metallurgical Coal on the other hand is sometimes referred to as “coking” coal and is used in the process of creating coke necessary for iron and steel production. Coke is a rock of concentrated carbon created by heating bituminous coal to extremely high temperatures without air. This process of melting the coal in the absence of oxygen to remove impurities is called pyrolysis.

Bituminous coal provides approximately 10,500 to 15,000 BTU per pound as mined. It lights on fire easily and can produce excessive smoke and soot – particulate matter – if burned improperly.

Conversely, Anthracite coal, mined from the planet’s oldest geological formations, has spent the longest time underground. The coal has been subjected to the most pressure and heat, making it the most compressed and hardest coal available. Hard coal contains greater potential to produce heat energy than softer, geologically “newer” coal.

Anthracite is incredibly scarce and is the most brittle among coal types. When burned, it produces a very hot, blue flame. A shiny black rock, anthracite is used primarily for heating residential and commercial buildings in the northeastern region of Pennsylvania, where much of it is mined.

Anthracite is considered the cleanest burning coal available. It produces more heat and less smoke than other coals and is widely used in hand-fired furnaces. Some residential home heating stove systems still use anthracite, which burns longer than wood. Anthracite has been nicknamed “hard coal,” especially by locomotive engineers who used it for fueling trains.

The ignition temperature of anthracite is roughly 900F but a correctly fueled coal fire can be as hot as 3,500F and typically produces approximately 13,000 to 15,000 Btu per pound, which is nearly 2x the btu per pound of wood. From a performance and heating standpoint, anthracite is a higher quality coal for domestic, open fire heating. While harder to ignite, anthracite does burn for a longer period of time at a hotter temperature, meaning it is more effective at providing reliable warmth for your household.

How coal is burned is just as important as the type of coal being burned. As a family owned business who manufacturers heating units using only the highest grade products available and manufactures in the United States, we at Alternate Heating Systems and Legacy Stoves have several unit options available to best suit your heating needs from central boilers and furnaces to single room heaters.

Our hand fired or traditional coal units use cast iron grates that are able to be manually shaken periodically, about every eight hours, to sift the ash, off the bottom of the fire. This is incredibly important because the air which supplies the fire with oxygen must come from underneath the fire through the grates. If too much ash accumulates under the fire, it will block the air flow. With a hand fired unit, it is the users responsibility to keep the fire fed with fresh coal and maintain the ash bed so that airflow is not restricted resulting in unburnt coal in the ash pan.

We also manufacture boilers, which utilize water in contrast to air, and provide your home with an even, moist heat that is distributed consistently throughout your home.

Our automated stokers are significantly more efficient than most hand-fired units due to their specific design and operate the most effectively using Anthracite coal. Our coal stokers make burning coal easy and stress free. As a company that relies heavily on the coal industry, we recommend using Blaschak coal at https://www.blaschakcoal.com, Reading coal at https://readingathracite.com and Lehigh coal at https://lehighanthracite.com. Experience has taught us that hard coal maintains a consistent temperature and is the best natural resource to use in conjunction with our heating systems when used properly. As a coal boiler/furnace manufacturer, our units capture heat the best in comparison to other products on the market and put it to work for you.

Not only do we believe in the efficiency of our products in conjunction with using the highest grade natural resources on the planet, our staff is family-focused, friendly and incredibly knowledgeable. We were founded in 1998 when Jeff and Phyllis purchased Eshland Enterprises and created Alternate Heating Systems, then in 2013  Alternate Heating Systems purchased the innovative technologies and proven standards of Harman Stove Company’s coal line and combed them with our own. We have over thirty-six years of boiler making experience and are ready to assist you in purchasing a unit best suited to not only your lifestyle, but to your heating needs.

We look forward to beginning not only a conversation with you, but a relationship.